Checking the inserts of an outer rear case of the V2500

In this case the CoBot checks if…
a) an insert is present and…
b) if the insert is blocked by a broken pin.

If an insert (threaded insert) is present and free, the CoBot checks the thread with the specified tightening torque. The shop floor workers only have to set up the CoBot and turn the component once in the process. In the end, the CoBot provides standardized damage documentation that is evaluated in engineering and then used as the basis for any subsequent repair steps.

For the thread inspection on an outer rear case of the V2500, including the subsequent marking of the detected defects, my colleagues in the corresponding workshops have so far needed about three hours. For them, this means doing nothing but performing the same repetitive activity in a highly concentrated manner for 180 minutes, and that for a total of 230 threads to be inspected. This activity therefore involves the risk that attention and accuracy are simply no longer the same for the one hundred and forty-fifth thread as they were for the fourth or fifth. If the employees is also distracted by their colleagues, it can also happen that a thread is redundantly and unnecessarily inspected several times. This makes it more difficult to ensure consistent quality of the thread inspection with uniform and high-quality documentation. 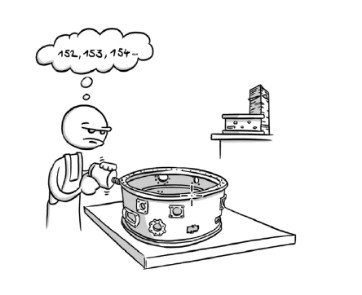 If the robot takes over the thread inspection, the work requirements of the mechanics are reduced to comparatively short set-up times, which in the exemplary application above only take up four to five minutes of their time. Time that my colleagues can now use for activities with higher added value, such as the diagnosis of components. Here, they can exploit their enormous expertise, with clearly positive effects on value creation and efficiency. The use of the robot thus improves quality even further. On the one hand, it inspects every tapped hole with consistent precision, which has led to a significant positive development in both quality and throughput times compared with the previously manual process. Secondly, the robot can immediately convert the data collected during the inspection into a „digital twin“ of the inspected component, creating a basis for further forward-looking maintenance measures, for example for „predictive maintenance“ applications.

More precise than the check of human

High degree in flexibility and adaptability 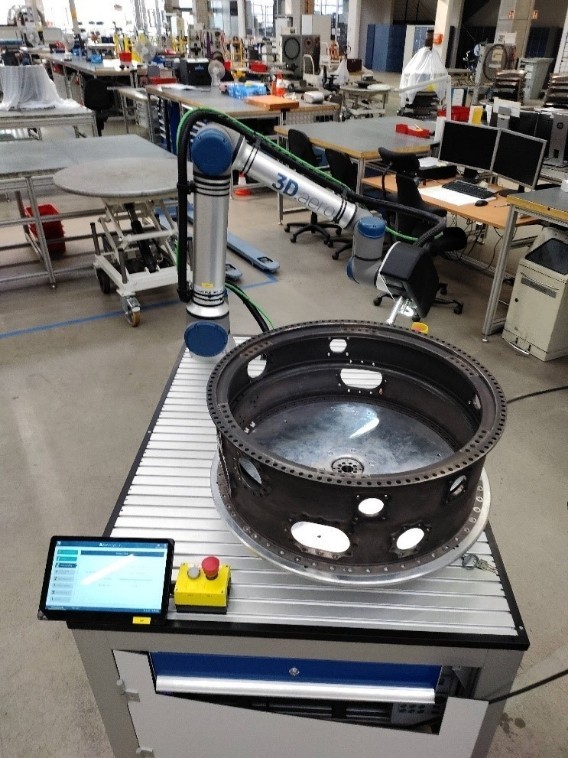 The design as a system in which man and machine „coexist“ (see graphic above) also enabled us to design the robot as a mobile system. It is only permanently connected to the rotary table on which the work pieces to be machined are placed and can be rotated 360 degrees around their central axis. At 1,200 x 1,400 x 1,700 mm, the robot and table unit are so compact that it can be rolled to any desired location in the workshop with great flexibility.   Despite the definition as a co-bot and the associated degrees of freedom for interaction with mechanics, we could not completely dispense with suitable measures for safe operation in a workshop otherwise „populated“ by humans, even with CoBot 2 DAT.   As a result, appropriate safety measures were implemented for the robot as well as for the rotary table and the screwdriving tool. The potential risk of people crushing or bumping into the robot was countered by reducing the traversing speed to a maximum of 250 millimeters per second. This also prevented jamming in the rotating component, as the rotary table only moves at less than one revolution per minute. In addition, the rotary table is driven without a brake, so that in the event of an emergency shutdown human operators can easily reverse it manually to prevent further damage. For the test tool, the maximum permissible pressure was also limited to 110 Newtons per square centimeter, which is monitored by appropriate force sensors. In addition, we have provided the screwdriving tool with a special protective cover. In general, it can thus be said that the Co-Bot also enables a high degree of flexibility and adaptability in this aspect. Its built-in vision system also brings the advantage that it can react very well to changing component conditions. Despite all this flexibility, mechanics must receive special training in which all the necessary protective measures are explained, as this is the only way to prevent a small residual risk. 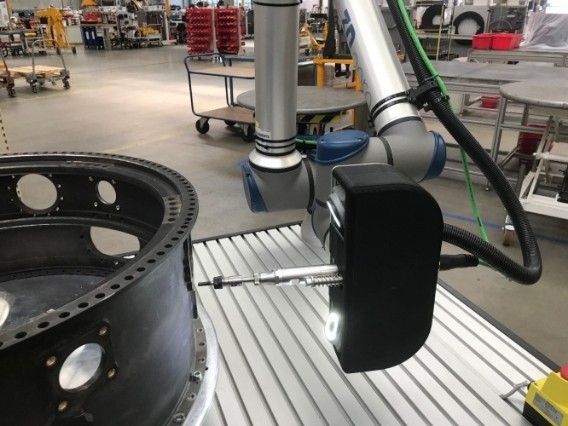 All questions concerning safe operation in human-robot coexistence were therefore discussed extensively by me and my colleagues with all the responsible bodies of internal co-determination, for example the works council and its committees for occupational safety or IT. Among other things, we had to clarify the relevant liability issues when dealing with the Co-Bot. Our partner 3D.aero was also able to contribute its extensive expertise in this area.

My colleagues in the workshops are unanimously positive about the Co-Bot, and not only because of the active involvement of all those involved. Those in occupational safety and quality assurance, as well as robotics experts and mechanics also provided promising feedback. The cooperation with 3D.aero as experts for innovative automation and digitalization of complex production and maintenance processes was also very positive and provided important impulses. Since the Co-Bot is also comparatively inexpensive to procure and intuitive to program, the CoBot2DAT project was also economically convincing, which is why the thread inspection has now been transferred to series use in the Hamburg engine workshops – as the very first Co-Bot ever in this business area.

Since the system is also excellently scalable, we are now also examining its use in other locations and application areas of the Engine Services business unit as well as in other business units. So perhaps in the future it will be „Domo arigato, Mr. CO-Boto.“ in many more workshops.

Interested? I am happy to be here for you!

“Get to know our practical and solution-oriented way of working, which starts with the uncomplicated testing of new ideas on a small scale and leads to the implementation of a certified automation solution.”

I look forward to the exchange! 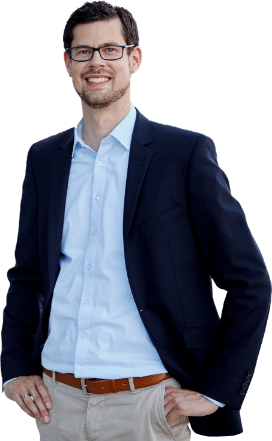